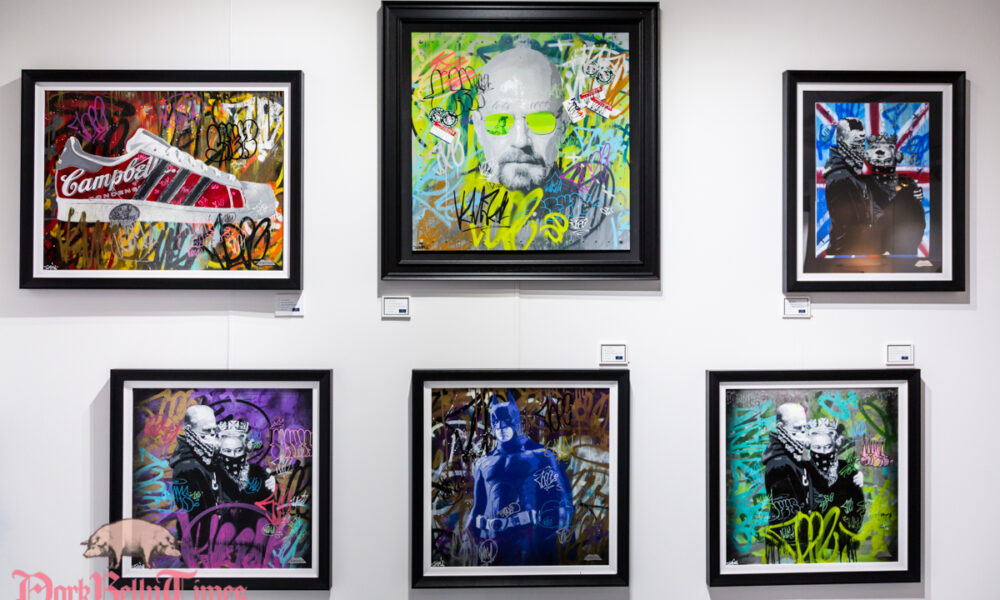 Miami Art Week spoils collectors and art enthusiasts with a wealth of treasures from around the art world. The best in Modern and Contemporary Art all converge here for our viewing pleasure. Everywhere you look there’s Botero, Calder, Chagall, Dali, Man Ray, Picasso, Warhol, you name it, they have it, and it’s for sale. But the beauty of Art Week extends far beyond established artists. In the midst of this art deluge are new, talented, emerging artists eager to make their mark. There were three emerging artists in particular that caught our attention; Zombiedan, Shark Toof, and ABH.

As we made our way through this year’s Scope tent, PBT spotted a colorful wall. It was filled with artwork from British artist, Zombiedan, represented by Eaton Fine Art. He makes work from layered stencils with a vandalized graffiti background, reminiscent of gritty alleyways. The artist makes 5 different-colored originals from stencils and then sells the stencil piece as well. Making each set irreplaceable. His subjects include Batman, Breaking Bad, and notably, the Royals. Zombiedan has only been devoting himself to his art full time for less than six months but is quickly gaining acclaim in the UK and abroad. All of the artist’s work sold at Scope, including, God Save the Vandal, which was acquired by Pork Belly Times.

Aqua also provides a great opportunity for new art collectors to obtain art that is more accessible than some of the larger fairs. At CASS Gallery Pork Belly Times had the opportunity to purchase signed edition prints from Los Angeles based, artist Shark Toof. His subject matter, as you may have guessed from his name, are sharks. The artist is known for his iconic wheat paste image of a hand drawn shark with TOOF in its mouth, and for the murals he’s painted from Miami to LA. He’s murals have even been featured in ad campaign’s for Samsung’s Galaxy Note II and Apple’s iPad.

Artist Al Baseer Holly, or as he’s known, ABH, made his international debut at Art Miami 2016. He is represented by Palm Beach gallery, Arcature Fine Art. ABH’s work is quietly being acquired and commissioned by the likes of art collector and famed fashion designer, Tommy Hilfiger. Who said about ABH’s work “it’s the new pop culture art of today, mixing a colorful take on cartoon, humor, and an eclectic cool factor. It hangs with Warhol, Haring, Basquiat, Lichtenstein and Condo.” Beyond  selling art that weekend, ABH and Arcature  were providing collector’s an opportunity at philanthropy when they purchased one of his pieces. Fifty percent of the proceeds from ABH’s “Random Access Childhood” Show at Art Miami benefited the Perry J. Cohen Foundation.

We asked ABH about his Mike Tyson piece, and his answer couldn’t have been more representative of “the new pop culture Art” that Hilfiger Spoke of. He told us of the piece: “I did it inside of a crate. Inside the crate, was where an Andy Warhol painting of Muhammad Ali was delivered to my house. So, once I took that painting out and the other stuff that was in the crate, I drew my favorite boxer back into it.”

We look forward to seeing these artists in upcoming art fairs, and to the evolution of their work. 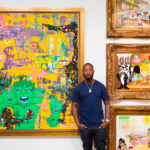 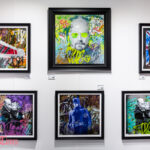