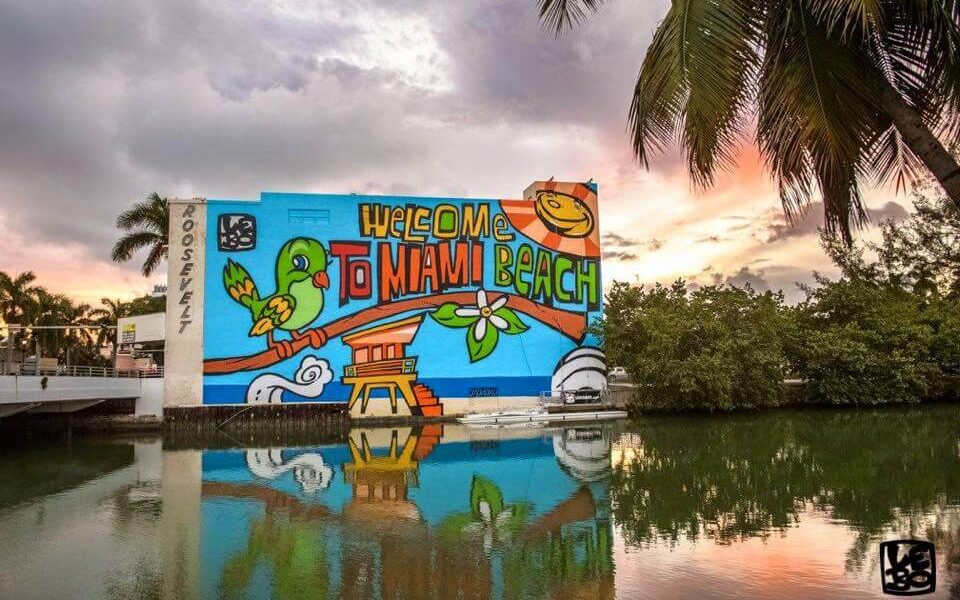 Lebo Welcomes You to Miami Beach

There’s a new mural welcoming visitors and residents to Miami Beach. The colorful mural was finished in early October and sits on the west facade of the vacant Roosevelt Theater on 41st street. The artist, David Le Batard, better known as Lebo, is no stranger to painting murals all around South Florida. His works include the walls of the Miami Dade Public Schools Building in downtown and a mural for the Boys & Girls Club that was in part commissioned by Lebron James and Sprite. His work can also be seen inside the American Airlines Arena, home of the three-time NBA champion Miami Heat.

The 50 by 120 foot mural evokes the feeling of a vintage Miami Beach postcard. Coming off the Julia Tuttle Causeway, visitors and residents alike will be greeted by a cheerful cartoon Monk Parakeet and a smiling Sun. The Monk Parakeet is not native to South Florida, but it has been a resident since 1969. They can be heard in the trees around South Beach. One of Miami Beach’s iconic Lifeguard Stations sits on the sand as a a wave rolls beside it. And Welcome to Miami Beach sails colorfully across the cartoon sky.

It was a challenging undertaking as the wall sits over a canal. Lebo said to the New Times that at first he wasn’t “thrilled about the idea” because of the amount of physical work it would require. Add to the physical toll, the logistical problem that is painting a mural over water, and one can appreciate the amount of work that it took to complete. Lebo even needed to purchase a dock that was up to Occupational Safety and Health Administration (OSHA) regulations since the task would be executed over water.

The piece is the largest art mural ever approved by city of Miami Beach and is located at 770 Arthur Godfrey Road, Miami Beach, FL 33140.

It was a hurculean effort by our time, but we just finished the Welcome to Miami Beach mural entrance. Many thanks so all the great folks at the Miami Beach city commission, Mendel, Johnnie, Rodger, Tom, Jason Tanya, Sylvia and all the friends that lended a hand. I definitely couldn't have done it alone. Humbled to be repping the city I've grown up in in such a cool way. #welcometomiamibeach #miamibeach #leboart