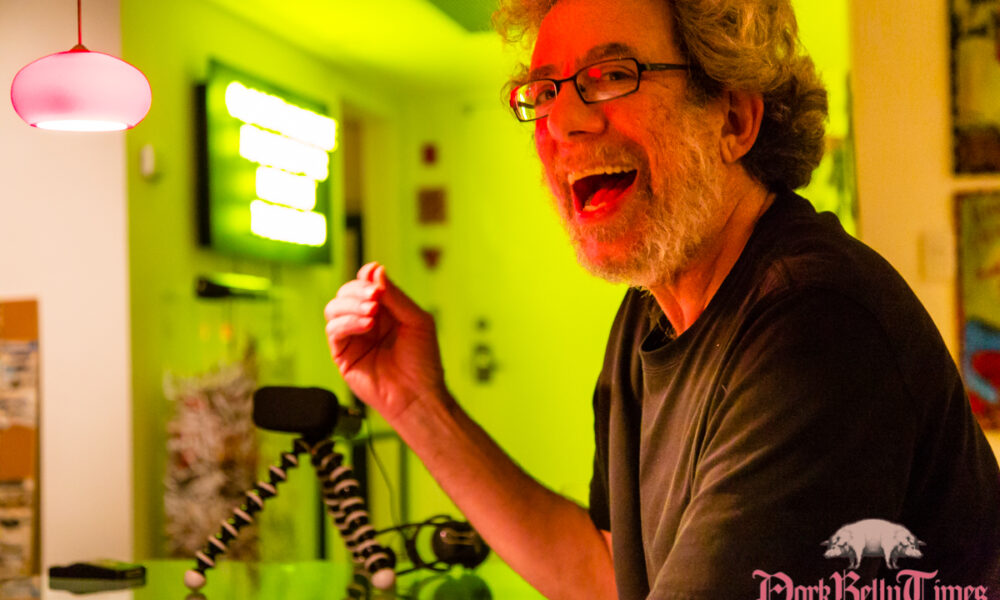 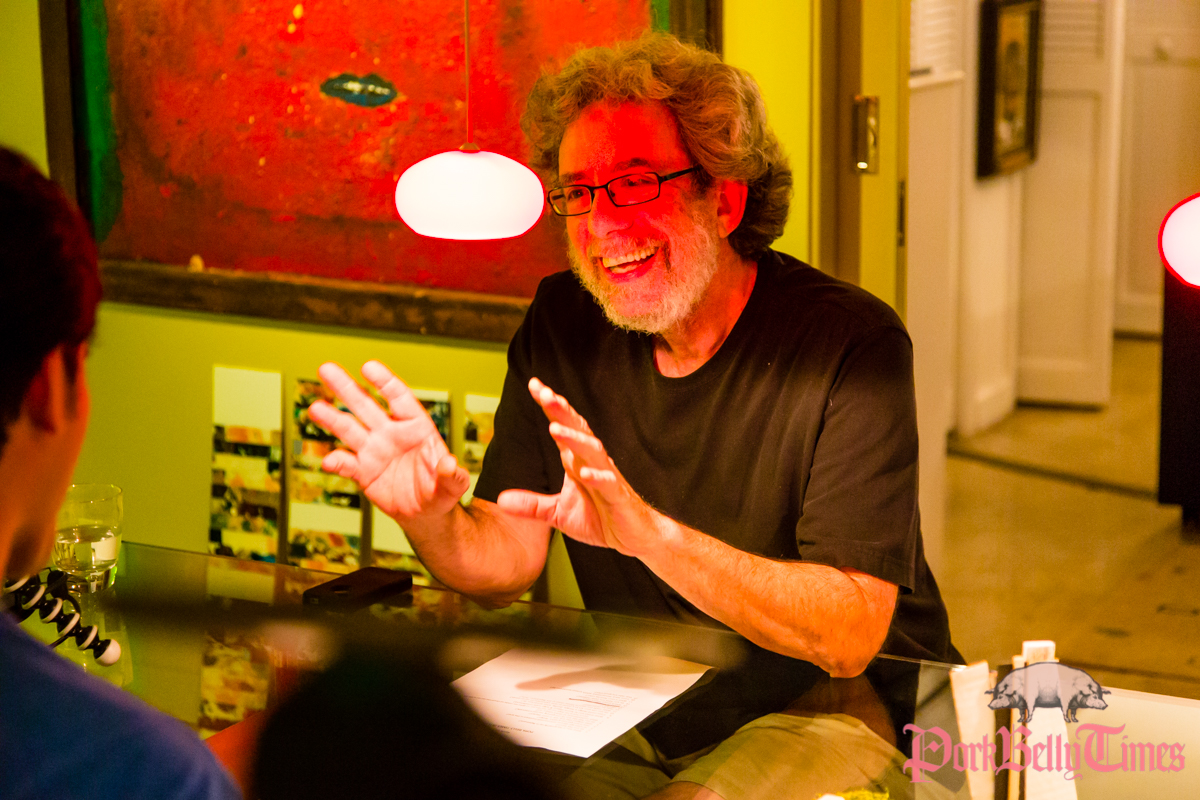 D     In reference to The United States of Oil piece, do you like to use your art as a vessel to raise social awareness?

R    Absolutely; the artwork reflects on the times and the environment that we live in. I guess artists can ignore that, but I feel very affected and want to comment on some things. On that particular piece, the curator put out a call with a theme and I responded to that theme. It was about the spill, after the last big oil spill, and I’m not sure I would’ve made it without that call. It was almost like the pressure of having an assignment due the next day. I’m not sure I would’ve made it otherwise, but I’m glad for the opportunity. I’m glad to be involved in the art community where I have some play back and forth and it’s not me in isolation.

Before I was gung-ho on making all this art but it became so abstract to make a painting whose point is to make you look outside of a painting, it became like… really, how about the real world? Which is why graphic design was so appealing to me, I could do something in the service of other people. They had something to communicate and I could fulfill that visual component of it, so it would free me of my own bursting creativity because there was no end to that. 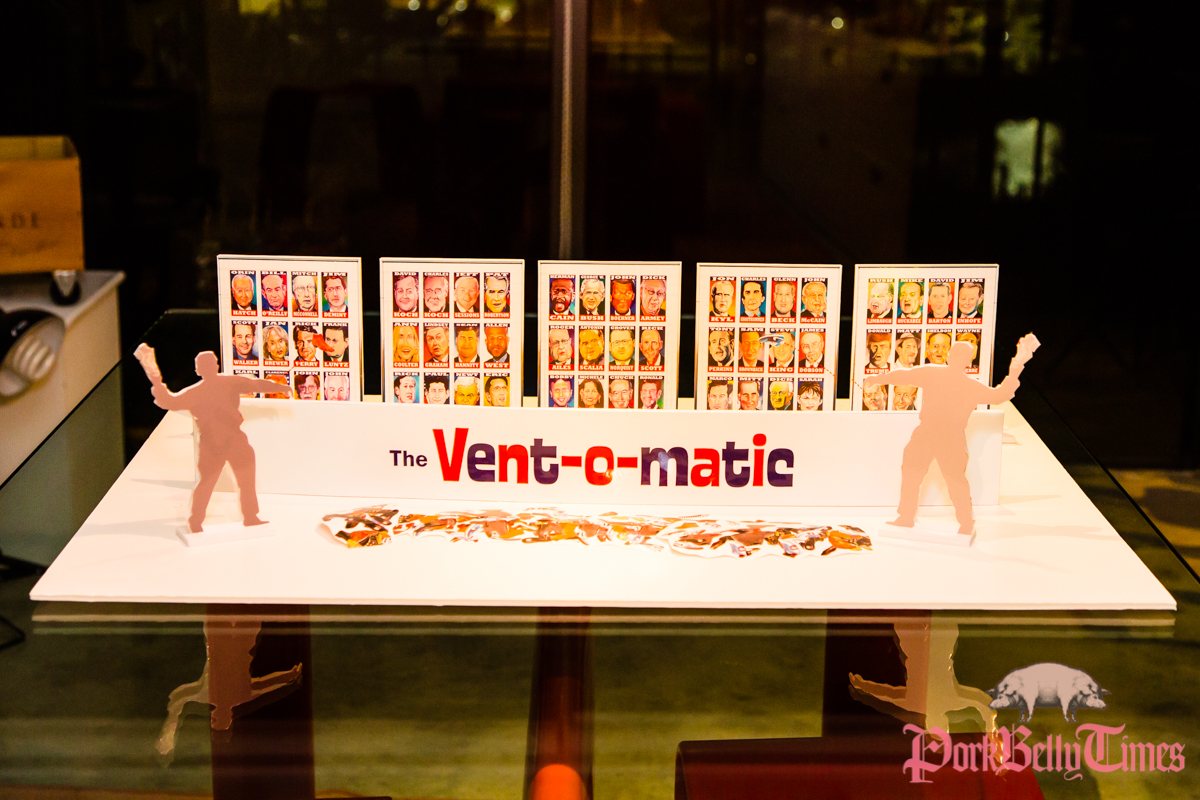 R    It’s called the Vent-o-matic now; it used to be called the Taliban Republicans. I chose that because the Republican operatives were so and are so successful in giving new meaning to things, opposite meaning to things, like Orwellian speak. If it was “No Child Left Behind Act” it would mean every child will be left behind, but they will call it the opposite of that. They were so successful I felt the other side of the spectrum needed some balance. They don’t say “Obamacare” without saying something like “that train wreck Obamacare,” so they’re always assigning some sort of description to things. So I thought, let’s make Taliban Republicans something you automatically attached to them, so it does identify them.

The far right is just so abusive. Manita would get so infuriated every time one of the Bushites or Romney or Cheney would come on T.V.  I thought she was just going to smash it because she was screaming so loudly, and I thought: “well, a lot of people must have this reaction to these people.” Why not have a public art service so that people that feel this frustration have a way to vent it.

D     After Ted Cruz’s filibuster, I think this piece couldn’t come at a better time.

R     Funny you should mention Ted because he wasn’t on the scene when I started this project but I do have one board left without anyone on it and I might add him as my last person.

D     I think you’d be doing a disservice to the piece if you didn’t include him after he helped shut down the government for his own self-satisfaction.

Someone asked me the other day: How come you’re so for government now, if back then you were a counterculture-type person, how come now you believe in government so much? I guess it has in part to do with President Obama. When you listen to him speak, the guy is just like NPR. He just sounds so reasonable. He still has to represent the war machine, which I could do without, but that’s part of his role, so here’s a reasonable person unlike some of these talking heads on T.V. which just sound wacko. Instead of investing so much in the military I think we should invest in mental health because even at a very high level we have some people that are just deranged. 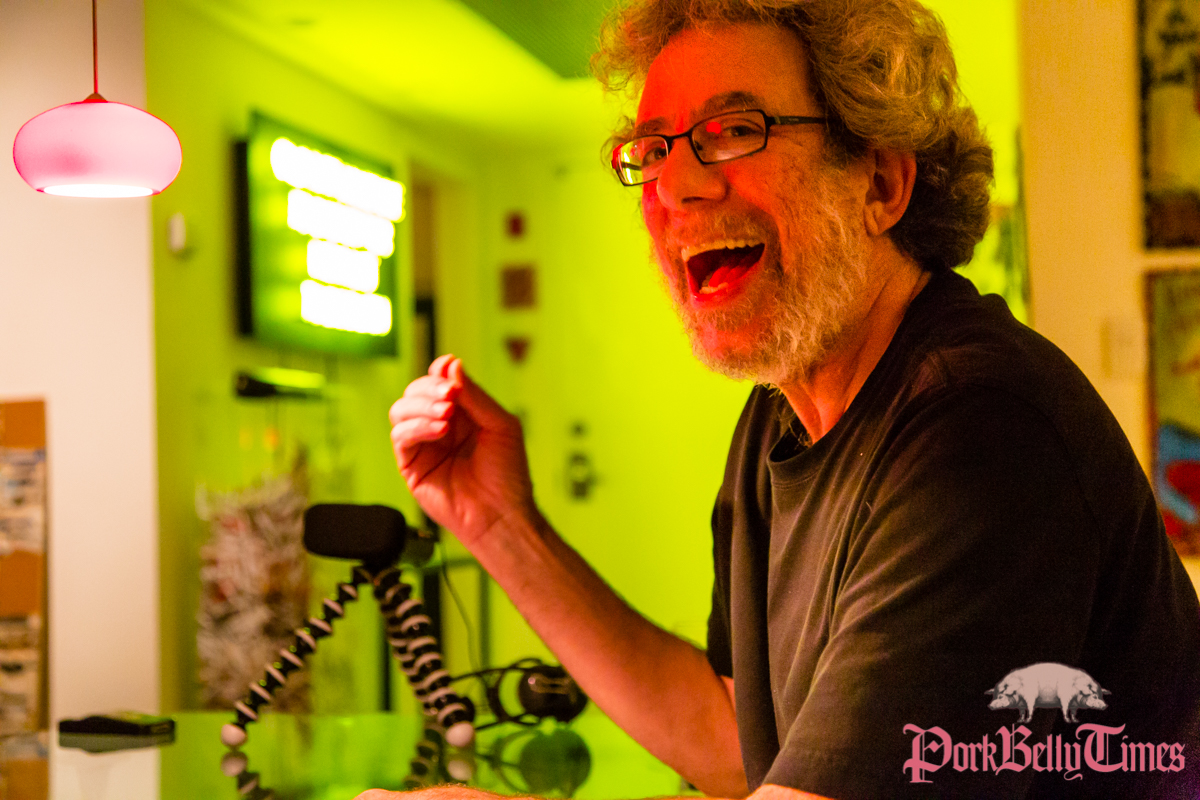 R     It should definitely be legalized. It gives me hope for civilization that people could come to their senses. You had a great example with prohibition: It failed miserably and now you’re doing the same thing –all built on hysteria and madness-. You have to wonder if the same type of corporate entities, like tobacco companies back then didn’t want any other type of smoking product, but now they’ll probably be the ones controlling this new industry. I think people should be able to grow it themselves and smoke it. I don’t know that it should be such a commercial product. What don’t people that pass prohibitive laws against a substance that doesn’t do any wrong understand about the pursuit of happiness? I’m not getting this.

R     Now, it might get a little more complicated when you go this route for marijuana. Is it the same for heroin? I don’t think so. I think some substances should be controlled, but I’m not sure all the facts are in on that even.  There might be somebody out there that can handle it. Maybe there should be some national test instead of prohibition. If that guy’s a junkie but he does pretty damn well, leave him alone. 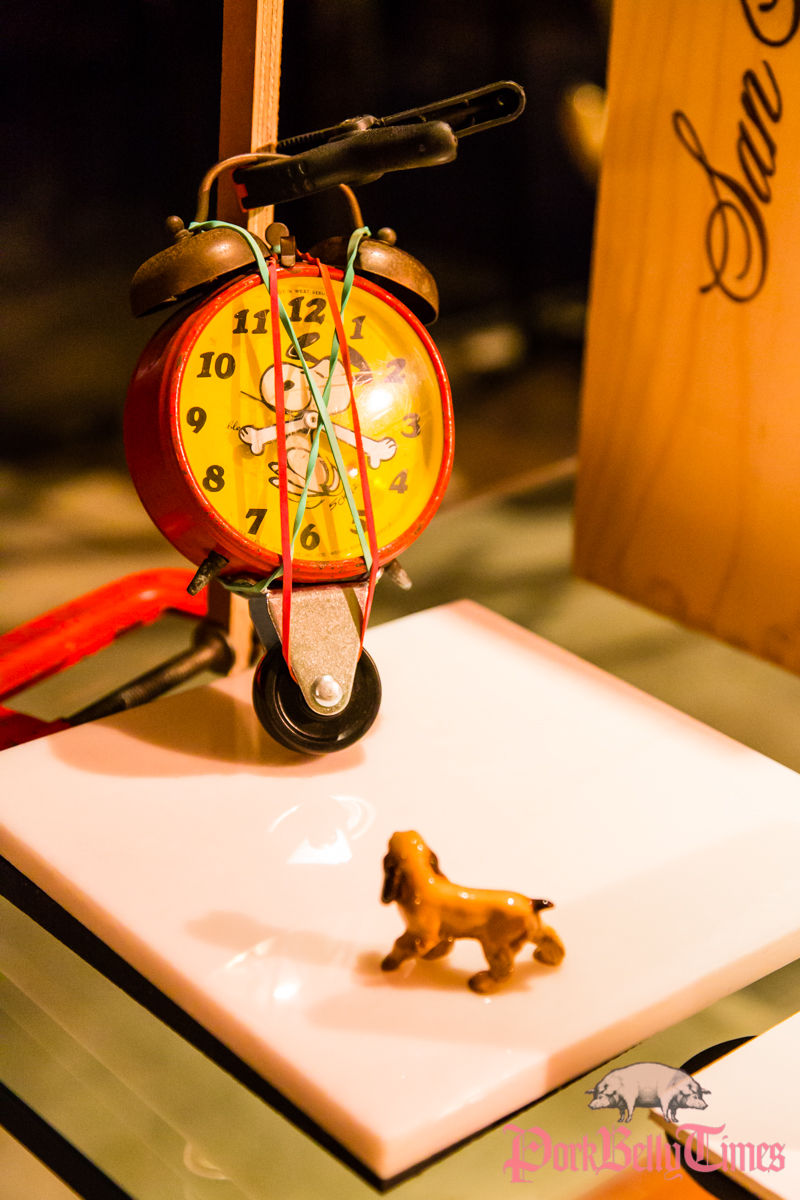 We’ve also created a great injustice. We have 10% of the African American population incarcerated. For what? Feeling a little better? This is more than a tragedy, this is oppression. I don’t want to show too many of my anti-establishment colors, but there’s been great injustices done in the name of us, starting with the natives. That was an extermination. How can we as a country go now and wave our high morality flag when we killed a whole nation of people and enslaved another? This is why other countries look at us like what’s the matter with these people.

D     We’ve touched on a lot of different subjects but before we go we want to hear about a good trip you’ve been on.

R     There’s so much of my counter-cultural years which were on another level, to put it one way.  On one of our cross-country trips we stopped someplace in the middle of the country and it was a beautiful starry night. I saw this band of white stretching across the sky. I thought it was incredible. 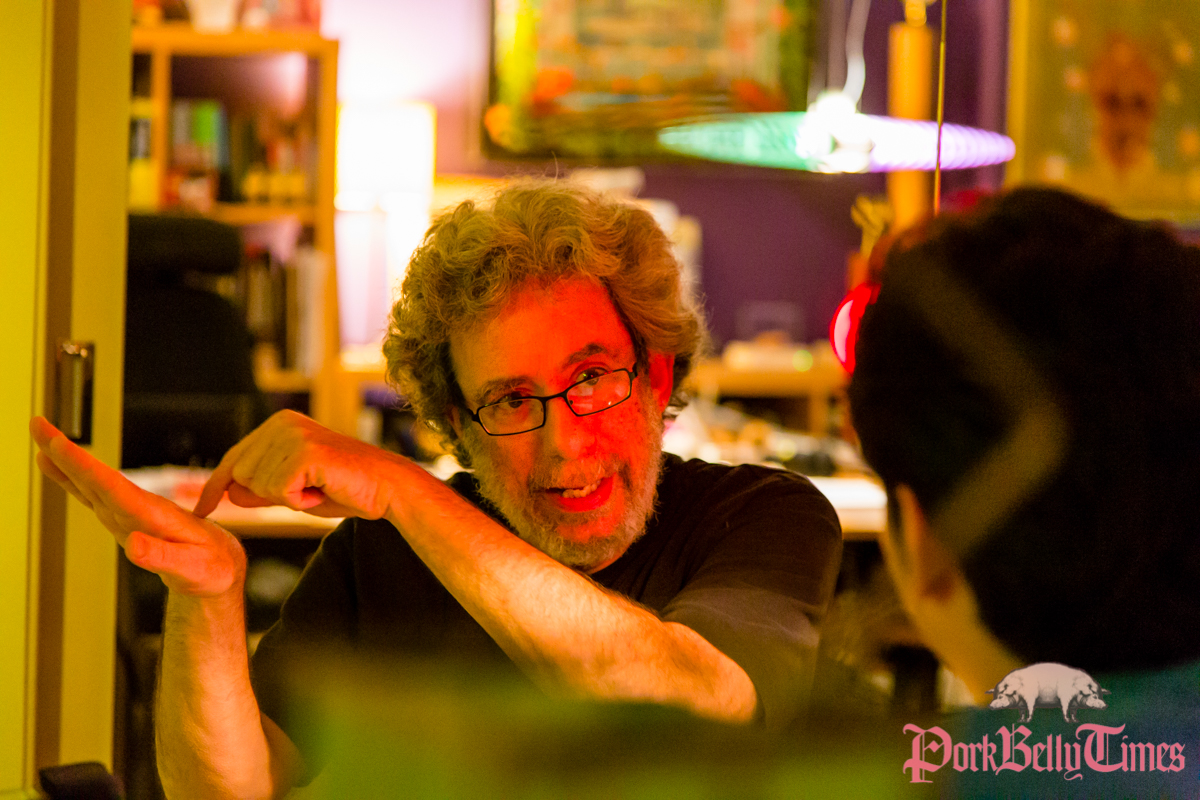 Then, one of the guys I was with said: You know what you’re looking at? I didn’t know; A band of stars or something.  He held his hand up with his palm open and said: This is the galaxy and we’re right here, and you’re looking through it man, that’s what that band is. I literally had to lie down to take in that information. It was like finding out you’re a grain of sand out in the entire ocean.

Another weird trip is this one where I can remember standing in line at Burger King and when I turned around there was this big eyeball. I thought humph, okay, just get the Whopper, keep moving in line, everything’s fine.

I’m not sure how much of this next one I want to tell, but I was at an outdoor Jethro Tull and Johnny Winter concert. It started a little late because it had rained earlier that day. The guy next to me, who I didn’t know, kept turning to me and asking: Has it started yet? I thought, we’re 11 rows from the front, and you keep asking me has it started yet? At some point he reaches into his shirt cuff and asks me: Hey, do you want one of these? I had no idea what it was, no clue at all. One would think that if a person had asked you repeatedly if the show had started, and you’re only 11 rows from the front, you’d say I’m okay, but no, I said yeah, sure. I guess it was horse tranquilizer or something, but I was the last person to leave the grounds that night. 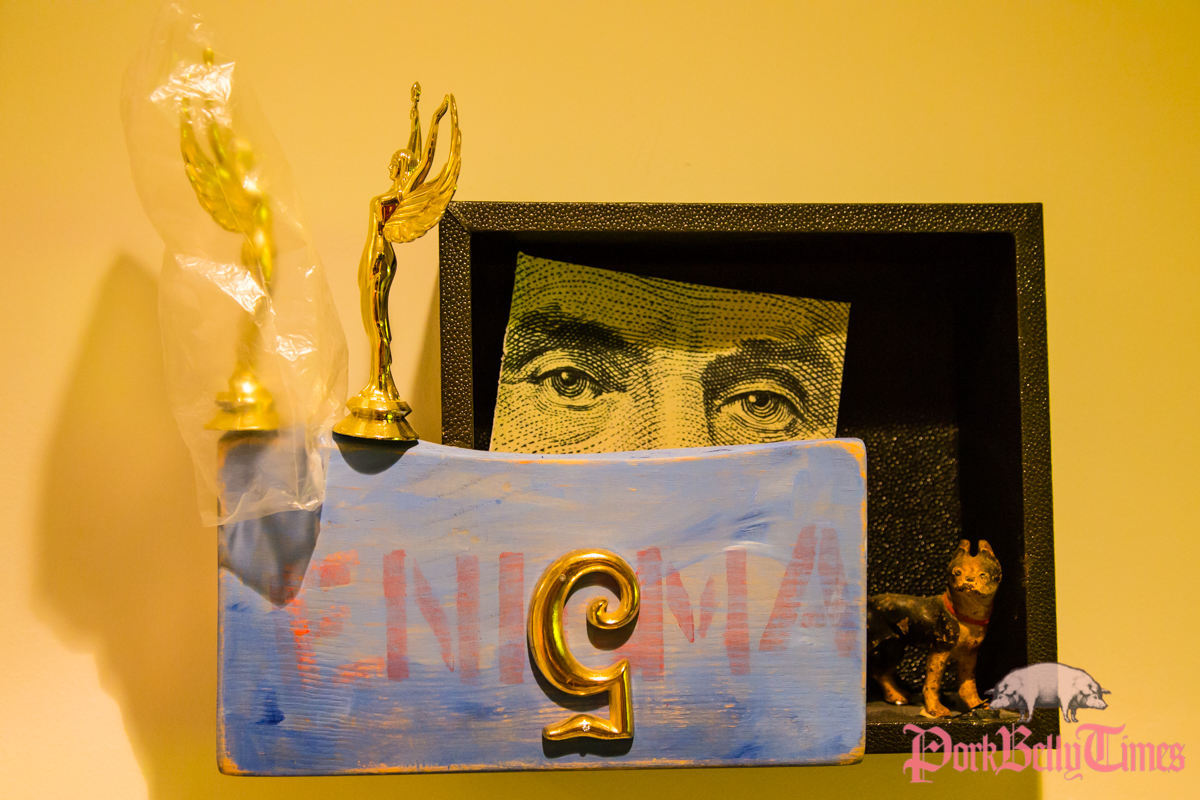 Let me back up a moment, earlier that night the girl I was with turned to me and said she was thirsty. In this altered state I looked across at where the concession stands were and it looked like continents, but I said yeah, sure, I’ll get you something to drink, with no idea how I would ever find my way back here again. -My God, you could get a soda for like 50 cents back then- I remember taking this quarter out of my pocket and when I put it on the counter it was like a manhole cover. She almost devastated me when I asked her if I could have a Coke and she said “We we we only only only have Pepsi Pepsi Pepsi.” It seemed like on the way back people had taken the wooden folding chairs and made bonfires out of them. I have no idea if that’s true or not but I was just heading in the general direction of North America and I did eventually find my way back to the seat. Was that trippy enough?

R     And I thought I incorporated some of those experiences into some of the art I was doing at the time. I was still in art school back then. I was working on fairly large paintings. I had these 8 foot squares. It was a size I liked for some reason. 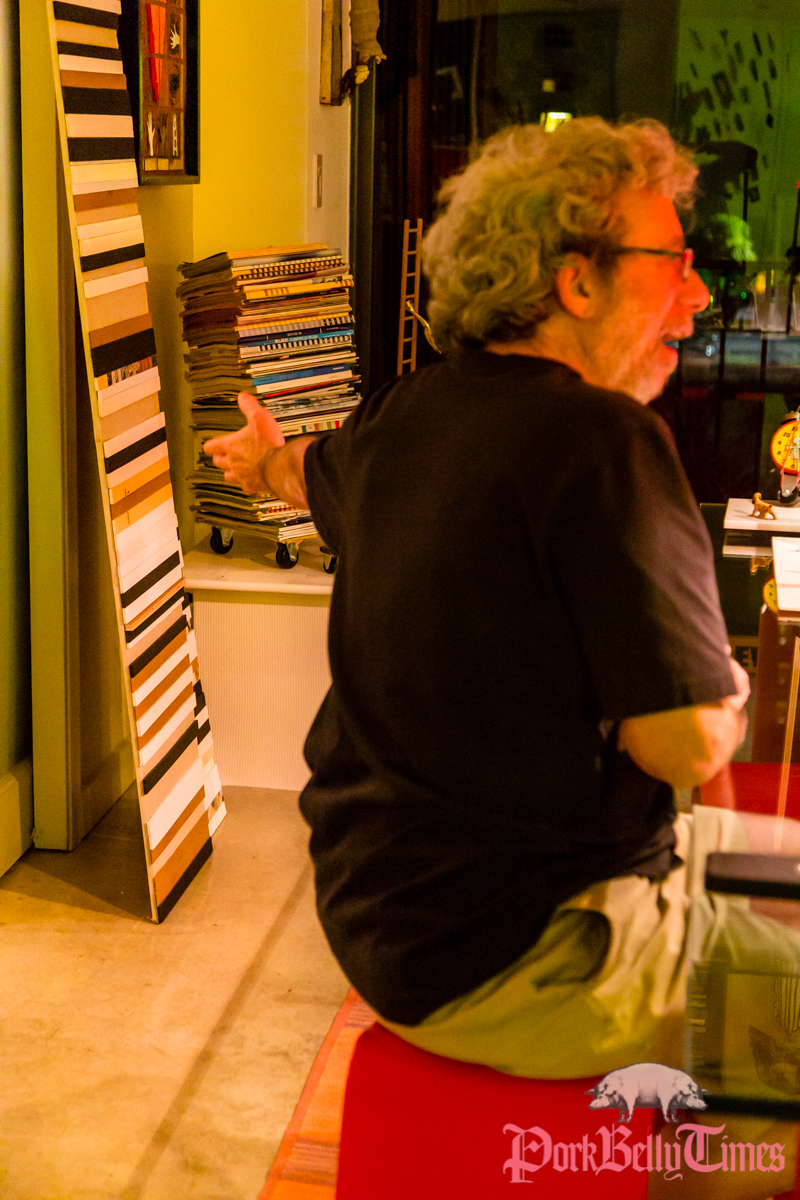 R     The last piece I did was probably the largest piece I’ve ever done. One of the things that is funny to me is that I’m making the parts in these little studios I have downstairs and there’s no way I could put them together. I could only make the pieces and then once I got to the place of the exhibit that’s the first time I would ever see it put together. I feel like that space downstairs has also kind of confined me. I’ve thought about getting a larger studio somewhere else. It is tempting to have a larger space where I can do larger things in. I think it’s a direction I’ll be going in.

D     Randy is there anything you would like to add, that we didn’t hit on?

R     I don’t want to get too serious about where I’m going with my art but I have discovered a pattern of the type of artist tools that I use. I don’t mean physical tools, but the tools of composition and color and repetition. I see a thread through the various art works that I’ve done. If you look at the Holy Mountain over here the pattern of those horizontal lines of the spines is very similar to some of the stuff I’ve done more recently. Here I am 5 years later still working with these horizontal lines. I see this design thread evolving and coming to light and I certainly intend to explore it.

More information on artist Randy Burman can be found at: www.randyburman.com