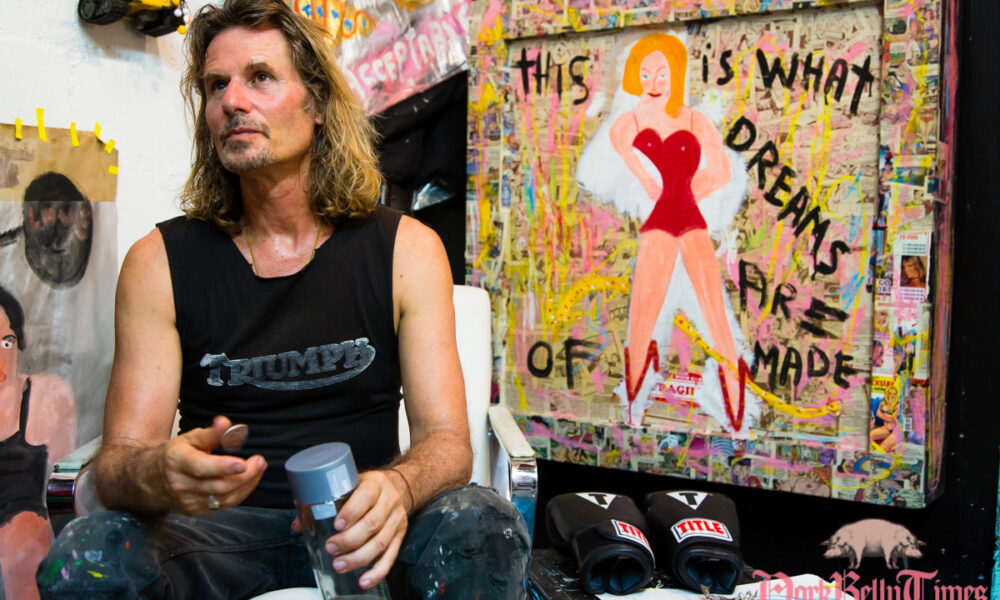 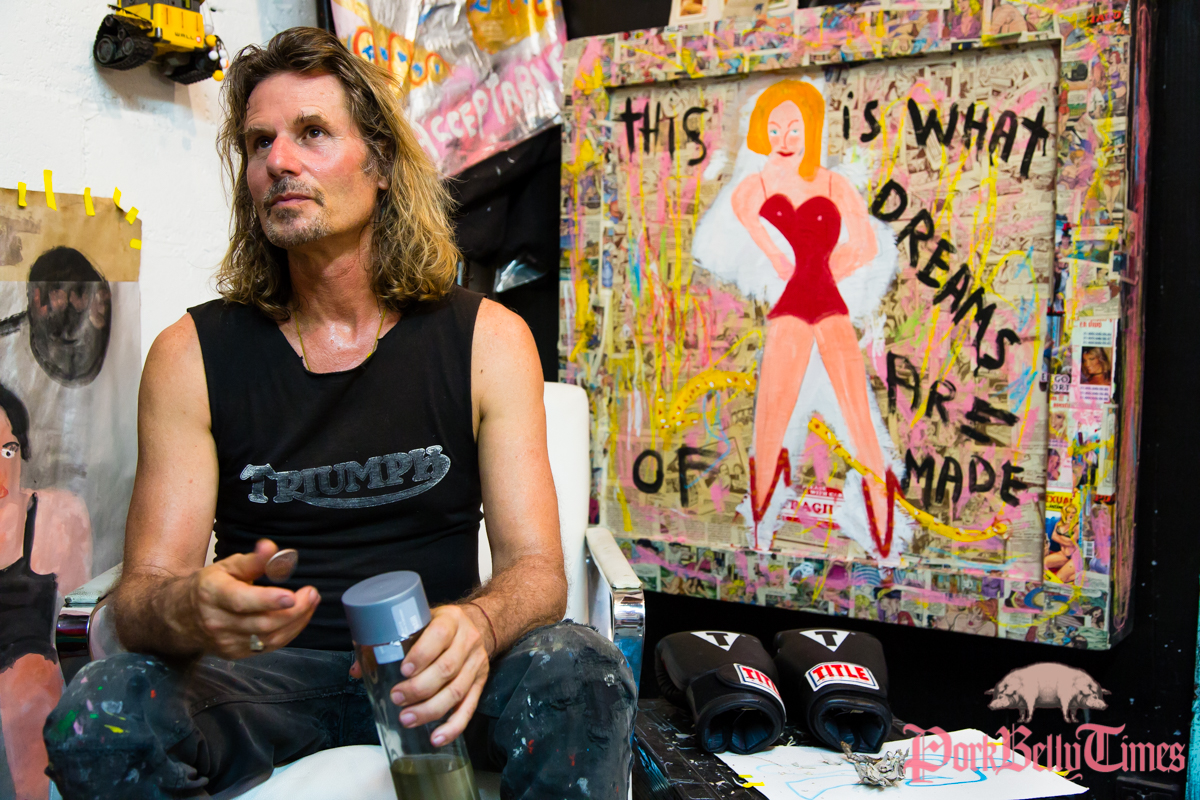 R     When I moved to New York in the late 70’s, early 80’s, I went to this gym on 14th street above this restaurant called Luciao’s. It was a real gym, like South Beach boxing, but more real. You had to walk up these creaking stairs, and there’s the smell of skunk, and people were really training.

D     You mean professional boxers trained at this gym? 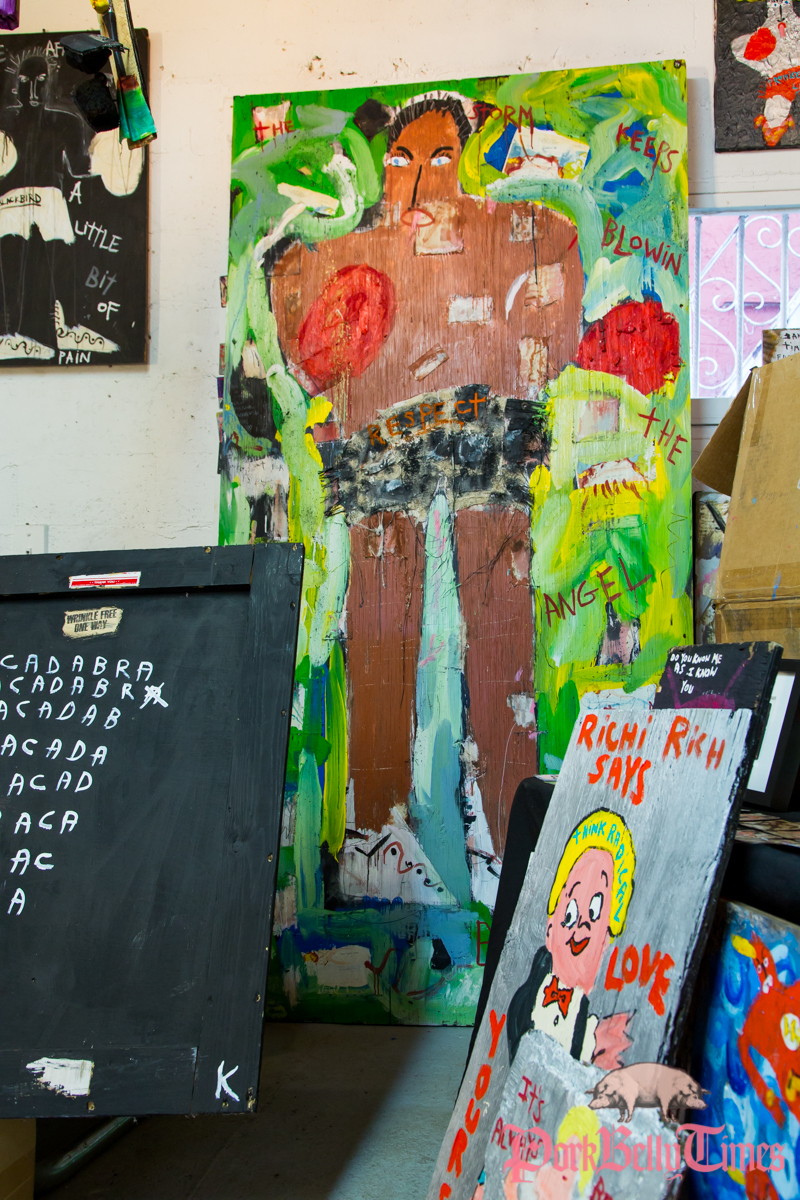 R     Yeah, I remember seeing this guy, a light weight, Puerto Rican. He was going to be fighting at the Felt Forum, the small venue at Madison Square Garden. He was a dancer, just incredible, and I remember hearing that he lost that fight. When you see someone who is really talented, and they (lost), you know me, I just trained. Here (in Miami) I went to the fight club and trained. There was this good boxer, Doug Hattier, he was from Philadelphia and he won his first 19 bouts. There were 4 or 5 guys that wanted to spar with him, so he’d take 3 min with each of us, and you’d try to do your thing with him. I really liked being part of that group. It was twice a week, you’d spar with him then with someone else for three minutes and rotate, and by the end of the night you got a really good work out.

D     Is that when you began painting boxers?

D     Before that what were you painting?

R     When I first got to New York I worked in film production, getting lights, coffee, bringing the bacon chips, carrying the camera bags. Then I worked on a couple of films, I did get to work with martin Scorsese on a film called “After Hours,” but all that time I was painting. I was painting flying dogs, it was abstract but it was a whole other time. It was inspired by living in the East Village in New York.

D     What drew you to New Mexico, and later Miami?

R     City life just started to wear -all the coke and dope-. It was the beginning of the AIDS stuff in New York so I knew a lot of people that passed away. The winters in New York got really long and cold; I started going to México for four or five months out of the year. One of the mentalities I had living in New York was that New York was all that there is, and as far as the R train went that was all that there was. For some reason I got invited to go to LA and it was like: Wow, there’s this whole other scene out here. So I started to have ideas about what is out in the world. 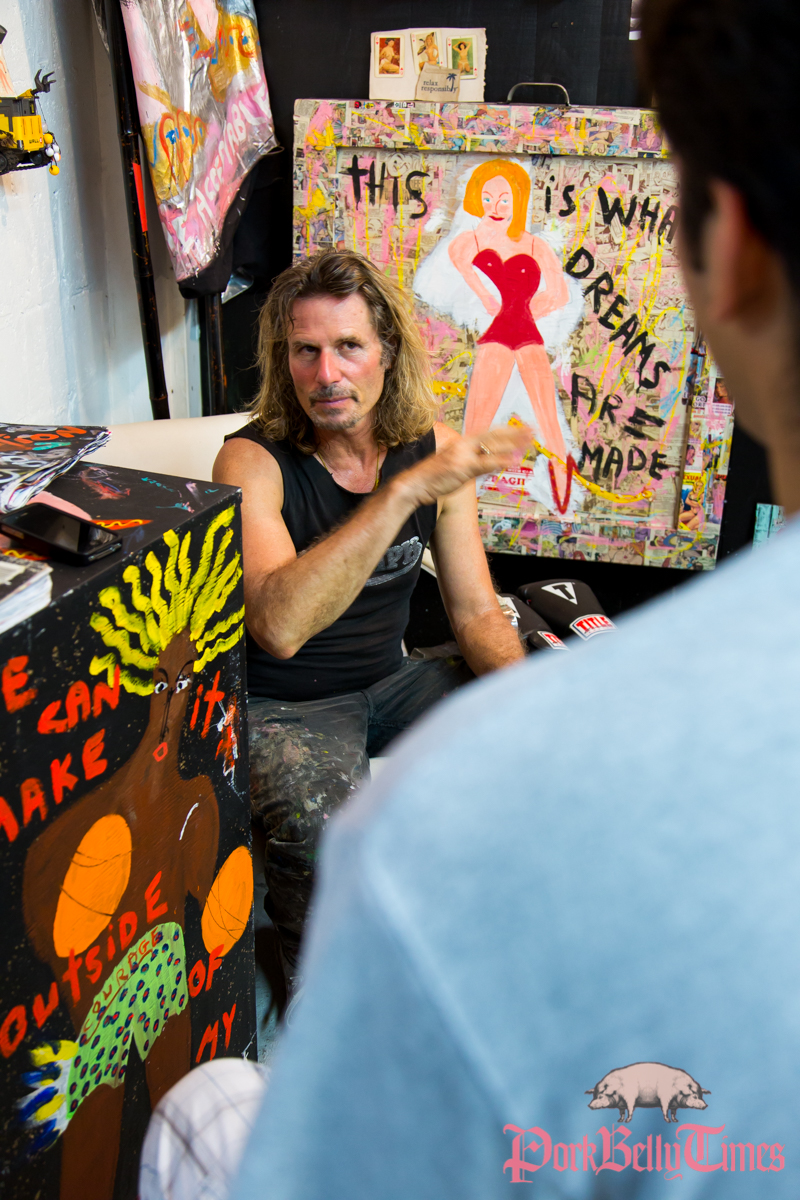 My girlfriend at the time was French Martinique and we bought a used car from a gypsy –like a real gypsy- and we had been going down to Taxco, Mexico and making silver jewelry, and so we said “let’s drive this car across the country and we’ll sell the jewelry as a way to get going,” and we could camp and see the country. We started in Manhattan some early summer and we went to Memphis, Knoxville, all the way out to L.A. and Seattle. It was my first time in New Mexico and I’d always heard of Georgia O’Keefe and the story of her trip, and I really liked the vibe of New Mexico. I liked the feeling of being grounded; I felt very grounded in the desert. Everything fit into place and the next year it worked out where I kept my apartment in the East Village, I found a place in Taos, New Mexico, and we were still going down to Taxco in México. It was the best of all worlds, living for three to four months in each place. So that’s how I got out to New Mexico.

R     Oh it was a great road trip, we learned a lot. We found this guy in New York that had this warehouse with these old Czech glass beads. I’d buy a couple strands. It was a dollar a strand for these 36 inch glass Czech beads. Back then we were selling them for $36 a dozen, I don’t even know how many number of beads I had –really beautiful beads-. So you’d go into a town and find where the hip places were, where the boutiques were, and walk in and if you’re lucky sell 300-400 dollars a day, and you’d get to see the place. It was good; it was like being blind, but at least having a way to keep the gas going. 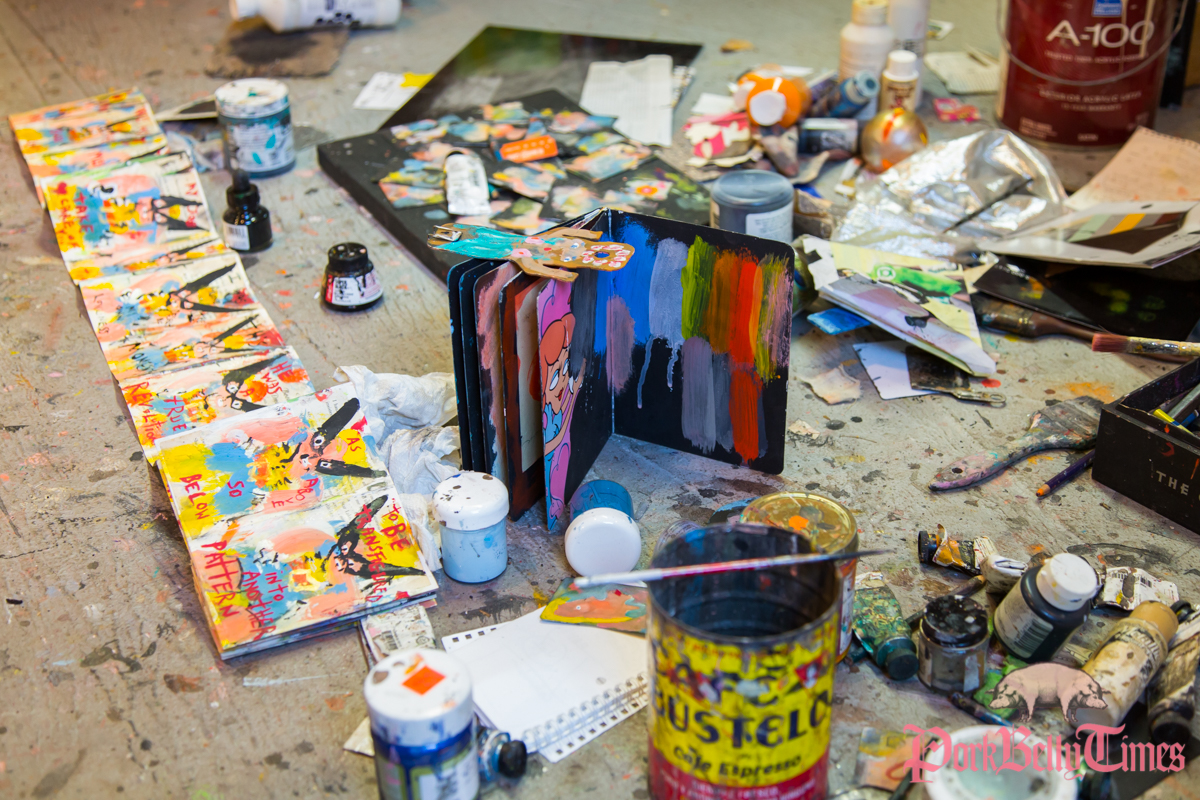 D     When did you transition into the superheroes?

R     Well you know, as a culture and as a country we’ve become more conscious of the morass of corporate totalitarianism that we’re living in now. And it’s going to take all of us to be connected to our super hero selves so that we can transform and transcend the shackles that we have right now, because… the shit is gonna hit. It’s like musical chairs, everyone is walking and knows it’s coming, it’s just a matter of when. So it’s like hey dude you’ve got your passport, you got your gold bars, you got your stores of bacon?

So the idea of the super hero whether it’s Flash, or the Green Lantern, or Wolverine, or whomever, it has attraction. One of the things I like is that I have the opportunity to work (play) with kids. I like when I worked with kids on the mural in Little Haiti or when I worked with some younger kids when I was in Santa Fe and I see that a lot of them are into super heroes. It is for me to be connected to the youth because those are the ones that we have been waiting for. Those are the ones that are eventually going to save us from being so blind to having  dreamt this reality where capitalism and money money money is what it is.

D     Does your art play a role as an emotional outlet?

R     I use a lot of text with what I’m doing. I realize I’m somebody that is my best self when I’m totally present in the now, and I think that’s what I really liked about boxing. When I got in the ring, just as a workout, I had to be there because if I was thinking about a past setback or a future appointment I’d always get hit to wake me up. I feel like life is here right now.

The more that I’m present with what is here, the opportunity is there for me to engage, and that is the glory of what the notion of boxing is to me.

The words (on the paintings) act as today; what I’m doing now is what I am today.  So if you guys are here, this is what I’m doing, this is it. Ideally I’m able to get some kind of understanding and follow the thread. Right now I’ve been doing these accordion books that span 40 pages and so, I may jump randomly but the idea is to see what the thread is through that so I can be a more conscience being with myself. It all starts with me and learning to know who I am, and learning to love who I am now, and forgiving myself for all the shit that went down and all the stuff that I did and not condemning myself for those things. I like to be light, to be able to move, because it’s so easy for me to carry a lot of baggage and be really heavy. So I feel like I have two sides, part of me wants to go deep and get it -whatever it is- but really it’s just to be simple, if I could just be simple, that’s it. 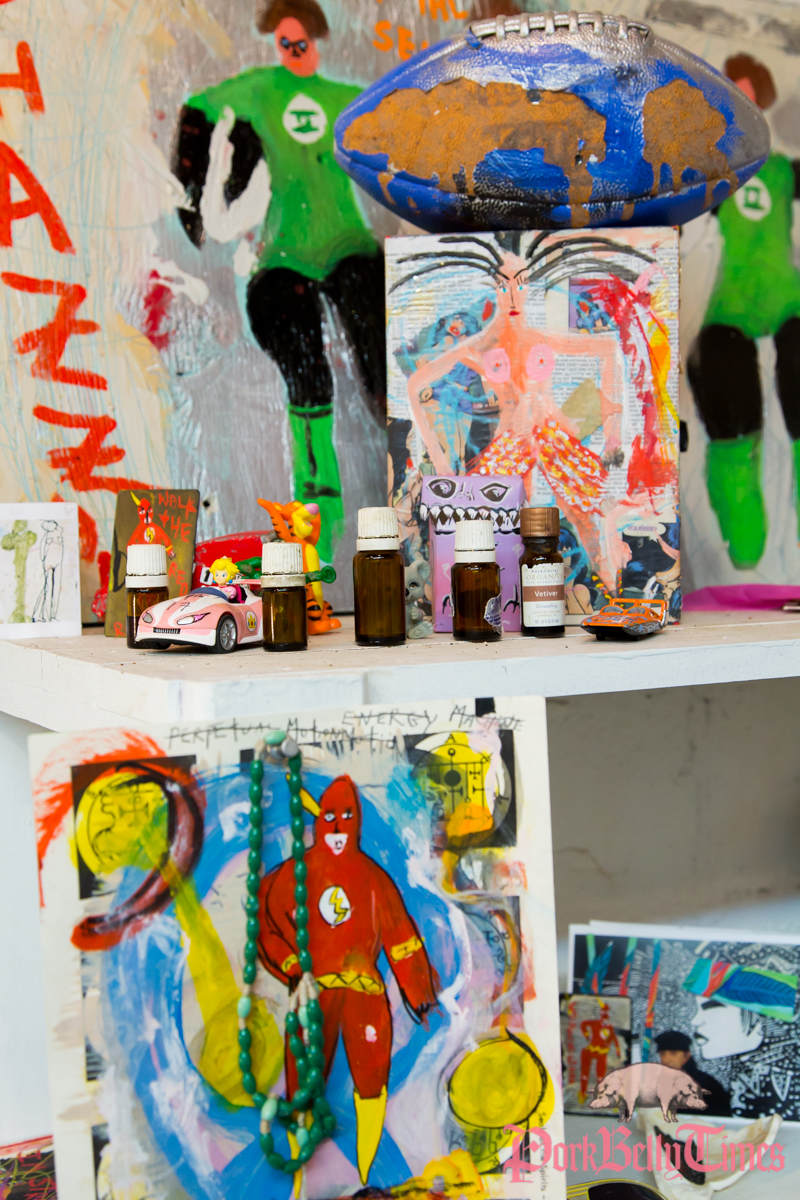 D     Do you draw redemption from your art?

R     It feels like the breath of fire, it’s like learning to breathe and relaxing and knowing that I’m protected, and that there’s a guardian angel. As long as I know that I know myself and learn to give love and share love with people who are less fortunate than I that I am protected by a certain grace of the universe. I still may have my own Karma or Dharma or what one may call “lessons to learn” while I’ve been given the gift to be on this planet. So I have a gift, but I also may take a couple of hits to (remind me) you’ve got an ego going “boom boom boom,” and that gets back to what New México was, and I’ll go further, being here in Miami, I find that the ocean for me is like my church, my synagogue, my temple, my place of prayer because it’s what gives me healing.

D     Do you have any lessons for upcoming artists? 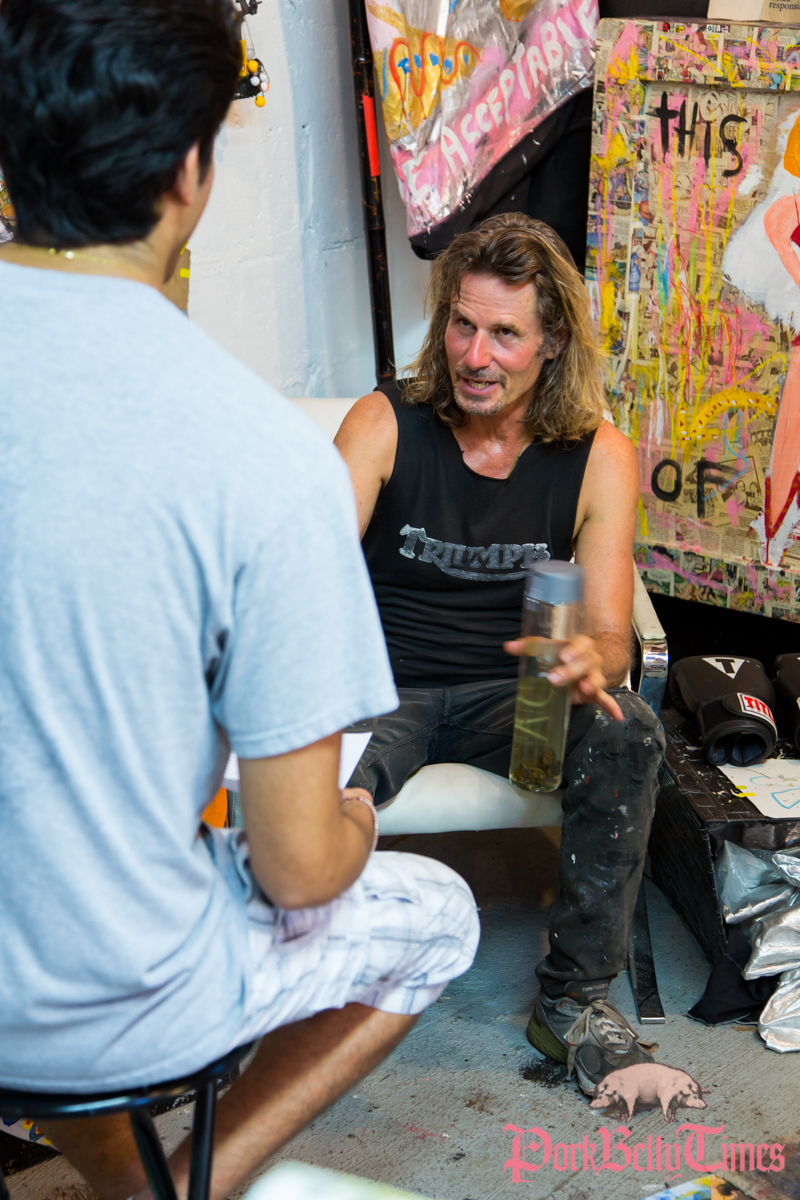